Delegate Dave LaRock said: “Bringing affordable broadband to Western Loudoun County is an urgent need. While some uses of the internet are optional, reliable internet access is a necessity for emergency services and K-12 education, which are shared responsibilities of the County and the Commonwealth. Local investment through this initiative can also help open doors for Loudoun to tap into Virginia Telecommunication Initiative (VATI) grants.”

The focus of the WESTERN LOUDOUN TELECOMMUNICATION INITIATIVE is to expedite expansion of privately-owned telecommunications infrastructure in underserved areas in western Loudoun County.

The goals of the WESTERN LOUDOUN TELECOMMUNICATION INITIATIVE include:

Supervisor Tony Buffington said, “Affordable, reliable, high-speed internet access for families and businesses is an investment. Decades ago, Loudoun County made a relatively small investment laying the groundwork for the data center boom in the east. The dividends are enormous. Now it is time to bring internet to the families and rural businesses in the west.”

Supervisor Geary Higgins added, “Government must send a clear message to private internet infrastructure and service providers, that local and state government wants them to serve our county’s internet needs and that elected leaders are committed to removing barriers to achieve that end.”

The Hon. Randy Minchew said, “This is a surmountable challenge; it is possible to remove barriers which hinder expansion to rural Loudoun County. The law I passed in 2016, allowing placement of conduit under gravel roads, is already streamlining rural expansion throughout the Commonwealth, and there is a lot more to be done.”

The application process for extending facilities to rural Loudoun County adds cost. The group is proposing buying down permit fees and passage of laws to improve access to existing easements, and stepping up collaboration with private companies to jump-start activity. The group is relying on information from the Loudoun Communications Commission Wireless Gap Analysis report from September 2014, and other County research, to further develop the criteria which will be presented to the full Board for a final decision.

More information and updates will be posted at https://www.votelarock.us/issues/broadband 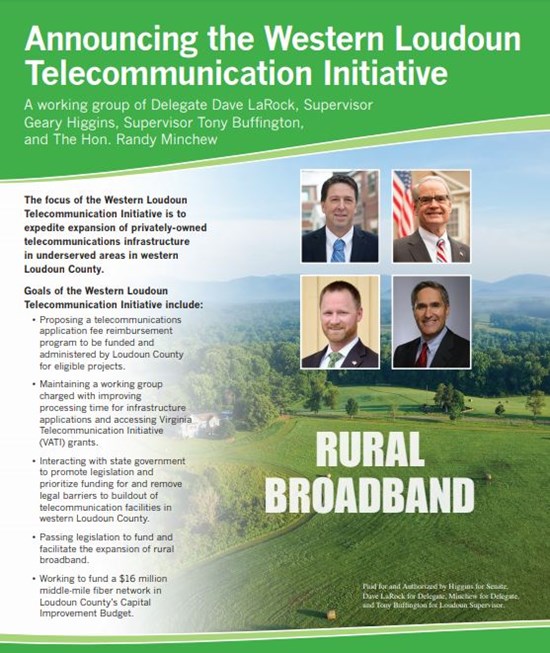